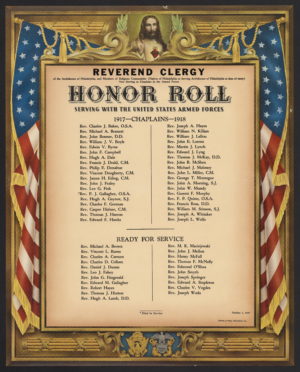 With the upcoming 100th anniversary of the end of World War I, this month’s blog post looks at the contribution of Catholic chaplains. The history of chaplains in the United States date back to the American Revolution when the Centennial Congress created the Chaplain Corps; however, Catholic priests would not be allowed to join until the Mexican-American War of 1846.[1] When the United States entered the war in 1917 there were only a handful of Catholic priests in the armed forces; however, by the end of the war that number grew to over 1,000.[2]

Of those, 38 chaplains came from the Archdiocese of Philadelphia.[3] One chaplain’s life of remarkable note was that of Father Joseph L. N. Wolfe. Born December 26, 1881, Wolfe attended Roman Catholic High School before entering the seminary. After being ordained by Archbishop Prendergast in 1906, Father Wolfe served as assistant pastor to a number of parishes including St. Patrick’s and Assumption B.V.M.[4]

When the United States entered World War I, Father Wolfe applied to be an army chaplain, being first assigned to Camp Meade in Maryland. In May 1918, he was assigned to the 110th Infantry Regiment in the 55th Brigade of the 28th Division and crossed the Atlantic to join the fighting in France.[5]

Wolfe’s letters back to the states were often published in the Catholic Standard and Times, which gives us great insight into the conditions that faced the American forces at the front lines. Father Wolfe saw action in the Second Battle of the Marne at Conde-en-Brie. Leading up to the battle, Wolfe moved around the different platoons to administer the sacraments.[6] After the battle, Wolfe described the Americans troops as “tired and weary and sad for their dead” but able to repel the German advance “by cold steel and American valor.”[7] According to a lieutenant in his company, even when the battle was raging father Wolfe was always “right up in the front line all the time, encouraging and administering to the boys.”[8] For his service Father Wolfe received the Citation Star from General Perishing.[9] 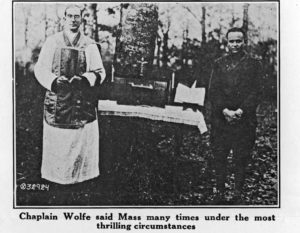 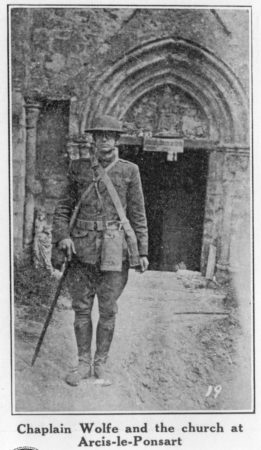 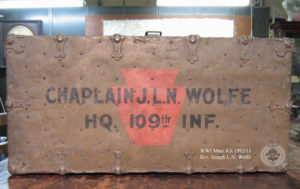 After the war Wolfe returned to St. Patrick’s Parish in Philadelphia as well as served as National Chaplain of the American Legion. Father Wolfe also holds the destination for being that first American priest to preach a sermon at the Cathedral of Notre Dame in Paris for the American Legions 1926 convention.[10] In the months leading up to World War Two, Wolfe once again became a chaplain, this time for the Pennsylvania National Guard; however, he would be discharged before the United States officially entered the war. Father Wolfe would serve as the rector of St. Gregory’s until his passing at the age of 67 in 1949.[11] His actions and the actions of countless others during World War One serve as an example of sacrifice and devotion to one’s country.

For more on Catholics in World War One, check out our online catalog.

[7] “’Knew We Could Lick the Germans,’ Father Wolfe Writes from Trenches” Catholic Standard and Times, November 16, 1918.

[8] “Father Wolfe is Lauded for Bravery Under Fire,” Catholic Standard and Times, September 28, 1918.

Your ticket for the: World War One Army Chaplains