In the fall of 1916, a new organization, the Alliance of Catholic Women (ACW) of the Archdiocese of Philadelphia, was officially founded with the approval of Archbishop Prendergast. The Alliance’s constitution stated that it was “organized for the allying of all charitable, educational, civic, and social activities of Catholic women.”[1] The organization functioned at the diocesan level as well as individual units established at the parish level. Under Cardinal Dougherty, it was made the official organization for women in the Archdiocese and many parish priests saw it as a way to aid in parish activities. [2]

The Alliance quickly established a place for itself in the city with a wide range of programs. The first major undertaking was the opening and operating of the Queen of Peace House, which was a shelter for girls and women. The home was located on 305 N 19th Street and opened on March 25, 1917. During its first year it gave shelter to over 400 women as well as aided in finding permanent jobs and homes for them.[3] During the Great Depression, Queen of Peace House also operated as a soup kitchen, giving out on average 700 meals a month.[4] Unfortunately, the high costs of running the shelter led to is closing in 1946.[5]

Another notable part of the Alliance was its focus on education. This took on a number of different forms over the years. In 1920 with its first major program, the ACW established an endowment to fund scholarships to the Woman's Medical College of Pennsylvania.[6] Named after an early member, the Dr. Julia Harton Scholarship sought to cover the full tuition of a Catholic student attending the college. Many of the recipients were members of the new formed Medical Mission Sisters.[7] The scholarship was discontinued in the 1950s because the constant increase in tuition outpaced the endowment. The Alliance and the college even went to court over the fund in the 1930s. The Pennsylvania Supreme Court ruled that if there were not enough funds for a given year, the Alliance would roll it over into sufficient funds were available.[8] Later, the Alliance of Catholic Women would go on to support students studying at Catholic University in D.C. and various seminaries. 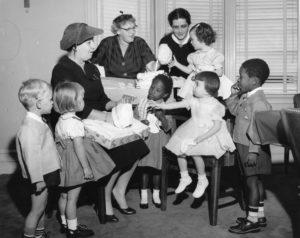 The Alliance also did charitable and evangelical work throughout the city. During both World Wars, members of the ACW were in charge of selling war bonds, selling millions of dollars’ worth in both wars.[9] In their 1940 year book, they mention working with the Sisters of the Blessed Sacrament to teach at the catechetical centers as well as providing aid to local families.[10] The ACW also regularly distributed clothes and food to the needy, giving out tens of thousands of pieces of garments per year as well as assisting families with holiday meals.[11] Every year the Alliance would also host Christmas parties for children of struggling families, where they would give out hundreds of new toys.[12]

In 1953, the Alliance of Catholic Women faced new competition from the newly formed Ladies of Charity of Philadelphia, which unlike the ACW did not charge membership dues. Despite this, the Alliance continued its charitable work in the archdiocese until 2000, when the organization ceased to exist.[13]

[1] Constitution and By-Law: The Alliance of Catholic Women of the Archdiocese of Philadelphia, MC78-80.153.

[5] Official Catholic Directory of the Archdiocese of Philadelphia, (Philadelphia: Catholic Standard and Times, 1946).

[8] Supreme Court of Pennsylvania: Hopkins on behalf of the Alliance of Catholic Women of the Archdiocese of Philadelphia v Women’s Medical College pf Pennsylvania, 06/17/1938, MC78-80.6130

[13] Official Catholic Directory of the Archdiocese of Philadelphia, (Philadelphia: Catholic Standard and Times, 1999).

Your ticket for the: Alliance of Catholic Women