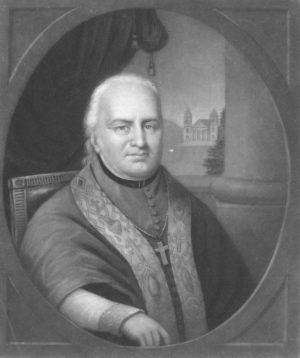 With a high school named after him and a statue in the Centennial Fountain, Archbishop John Carroll has had a continued presence in the city of Philadelphia. As the first bishop of the United States, Carroll had a major impact on Catholicism in America, but who was John Carroll and what were his connections to Philadelphia?

John Carroll was born to Eleanor and Daniel Carroll on January 8, 1735 in Maryland. At a young age he was sent to Flanders to study at St. Omer, a Jesuit school.[1] In 1753, Carroll would enter the Jesuit novitiate, beginning his studies for the priesthood.[2] Despite the suppression of the Jesuits in France, Carroll was ordained a priest in 1769 and took his final vows in 1771, two years before the order would be suppressed by the Pope.[3] He would return to American in 1774 and quickly became involved in the Revolution, accompanying his cousin, Charles Carroll, and Benjamin Franklin on a diplomatic mission to Montreal in 1776.[4]

After the war, Catholics in the newly formed United States wished to have a separate jurisdiction created so that they would no longer be under the Vicar Apostolic of London. So in 1783, the American Catholic clergy sent a letter to the pope requesting a new American apostolic. On June 9, 1783, Pope Pius VI made John Carroll the Superior of the Mission in the Thirteen United States of North America.[5] Based in Maryland, Carroll would come to rely on Father Ferdinand Farmer, S.J. as his main contact in Philadelphia. Farmer, who at the time administered to Catholics in the city as well as most of eastern Pennsylvania and New Jersey, would be made Carroll’s vicar-general when Carroll was made bishop. [6] 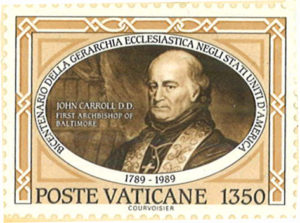 After several years of continued growth of Catholicism, America was ready for its first bishop. Twenty-six priests met in Maryland to vote on a recommendation for the pope. Carroll received 24 of the votes and the Vatican appointed him the new Bishop of Baltimore on November 6, 1789.[7] The city of Baltimore was chosen as the episcopal see because it was “situated in Maryland which province the greater part of the priest and of the faithful inhabit, appeared the most conveniently place for the intercourse with other States, and because from this province Catholic religion and faith had been propagated into the others.”[8] 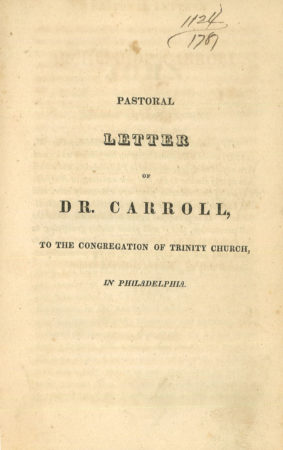 Pastoral letters of Archbishop Carroll, to the congregation of Trinity Church, in Philadelphia, 1797. https://omeka.chrc-phila.org/items/show/8126

One of the first major challenges to Carroll’s new role as bishop came from the German parish of Holy Trinity in Philadelphia. In September of 1796, a new priest, Father John  Goetz, arrived at the parish and was made assistant pastor by Bishop Carroll.[9] However, by the end of the month, Father Goetz was unhappy with being assistant and wanted to be pastor of the parish. So with the backing of some of the trustees, Father Peter Helbron was removed and Father Goetz was named pastor.[10] In October, the trustees declared that because Carroll and the other clergy were conspiring to “deprive us of our church and rights” that no one would have authority over them.[11]

When the trustees would not back down, Bishop Carroll wrote a pastoral letter on February 22, 1797, calling for them to reconcile. In the letter, Carroll stated that they and Goetz had usurped “the chair of truth” and converted “it into a seat of falsehood and lies.”[12] He would go on to compare their actions to that of Luther and Calvin and declare that their actions were heretical.[13] When Carroll came to the city in 1798, the trustees had him arrested and it would not be until 1801 that Holy Trinity finally submitted to Carroll’s authority.[14] This however, would not be the last time that Carroll and the hierarchy were threatened by schism from Philadelphia.

With the creation of new dioceses in 1808, the now Archbishop Carroll, was in charge of organizing the governance of the new hierarchy. For Philadelphia, Carroll recommended Michael Egan, who would be made the city’s first bishop. Carroll would call together a provincial Council of all the new bishops in 1810 to lay out rules to administer their dioceses by.[15] During his time as bishop and archbishop, Carroll would also establish Georgetown University and encouraged the printing of the first English Catholic bible in America.[16] John Carroll would continue to guide the new dioceses until his death on December 3, 1815.[17]

[16] The Catholic Historical Research Center has a Carey Bible in its collection, which was own by Thomas Fitzsimmons, one of the two Catholic signers of the Constitution.

Your ticket for the: Archbishop John Carroll