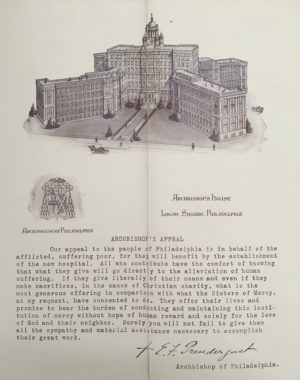 On July 2, 1918 the Sisters of Mercy opened a new 100 bed hospital in West Philadelphia.[1] Named Misericordia Hospital, the opening of hospital was a long project that dated back to 1910 when Archbishop Prendergast first approached the Sisters about building a hospital.[2] So with the support of the Archbishop, Mother Mary Patricia Waldron, head of the order in Philadelphia, purchased a farm plot for $100,000 after having to mortgage most of the Sister’s properties.[3] To help offset the costs, Prendergast started a fundraising campaign in 1915, which raised over $160,000 in the first two weeks alone.[4] With the new funds, the Sisters broke ground on the hospital on October 24, 1915 and had a ceremony for the cornerstone on September 24, 1916.[5] Original designs for the hospital involved the main building as well as four diagonal wings to form a cross of Saint Andrew; however, only the main structure would be built.[6] 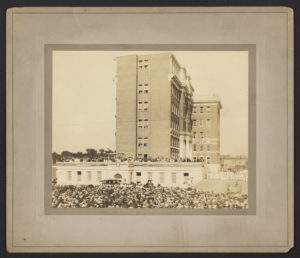 Dedication of the Misericordia Hospital, 1918 https://omeka.chrc-phila.org/items/show/6863

The Hospital was dedicated on June 9, 1918 by Bishop McCort, who declared that “on this glorious day, the dreams of years are realized and sacrifices untold have their reward.[7]  Unfortunately, neither Mother Patricia nor Archbishop Prendergast would live to see the completion of the hospital that they was so influential in building, having passed away in July of 1916 and February of 1918 respectively.[8] Misericordia had a quiet two days after opening before the first patient, a Ms. Bridget Murry, was admitted into the hospital. [9] Since that day the staff has continued to care for the sick of West Philadelphia. Indeed, a report on the first two years of the hospital stated that the medical staff had cared for over 4,000 patients as well as 16,000 people through the dispensary.[10] The report also broke down the types of diseases treated, with enlarged tonsils the most common with 609 and appendicitis the second most with 171 cases. Some interesting less common cases were one case of arsenic poisoning and 10 gunshot wounds.[11] 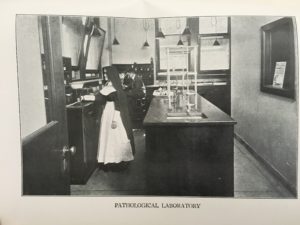 First Report of the Misericordia Hospital, 60 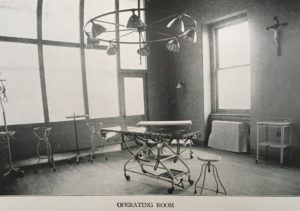 First Report of the Misericordia Hospital, 38

Due to the demands on the hospital, the Sisters quickly decided to expand and opened a west wing in 1921. This expansion was necessary as Misericordia would see over a half a million patients come through its doors within the first twenty years. The hospital continued to expand and would add two more wings over the years, bring the total number of beds to 400 by 1968.[12] 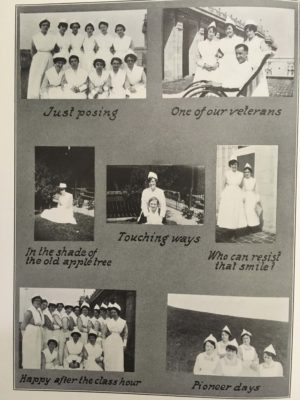 The Nursed Record of the First Graduating Class of the Misericordia Hospital (Philadelphia 1921), 32.

An important component of Misericordia hospital was its use as a teaching center for doctors and nurses. Indeed, even before the hospital officially opened, the Sisters of Mercy set up a training program for nurses. The first class of 21 students started in May of 1918 and graduated on May 21, 1921.[13] By 1968 almost 2,000 nurses were trained at Misericordia.[14] 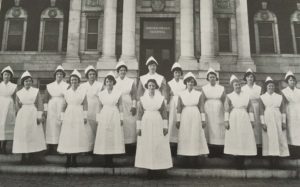 In 1967 plans were made to merge the running of Misericordia with Fitzgerald Mercy, a hospital in Delaware County run by the Sisters of Mercy. One of the major goals of the merger was to increases and expand the medical teaching programs, which would allow students to be exposed to more treatments of various diseases.The last class of nurses graduated in 1971 due to the closing of the the nursing program.[15] The hospital would continue to expand with a new cancer treatment center opened in 1992 and and an emergency care facility in 1996.[16] While Misericordia was renamed in 1997 to Mercy Hospital of Philadelphia and since 2008 has been known as Mercy Philadelphia Hospital, it has continuously served sick in Philadelphia for 100 years.

[13] The Nursed Record of the First Graduating Class of the Misericordia Hospital (Philadelphia 1921), 25-27.

[16] "From Misericordia to Mercy Philadelphia."

Your ticket for the: Misericordia Hospital