With the approach of the centennial celebrations in Philadelphia to mark the signing of the Declaration of Independence, the Catholic Total Abstinence Union of the Diocese of Philadelphia wanted to partake in the festivities. To do so, the organization proposed building a fountain in Fairmount Park to celebrate temperance, Catholicism, and Irish-heritage. In order to accomplish this plan, in 1873 the group brought a proposal forward at the third annual convention for Catholic Total Abstinence Union of America (CTAU). The resolution passed with the stated goal of the fountain being a “testimony to the patriotic feeling of the Catholic Total Abstainers all over the United States.”[1] 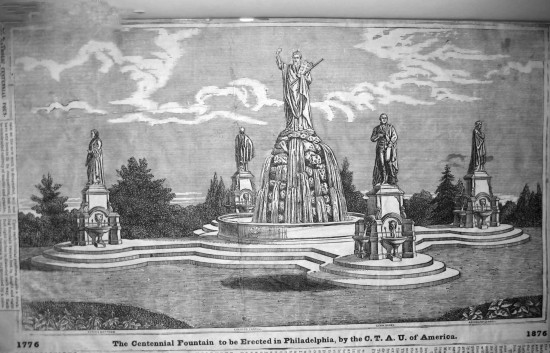 With the approval and backing of the national society, the Philadelphia chapter began planning and fundraising. After an original design focusing on the connection between America and Ireland was rejected, a main theme around Moses striking the rock to give water to the Israelites was chosen.[2] The change was due to the Moses allegory of life  giving water being better focused on the CTAU’s mission to encourage people to turn away from alcohol. While the main Irish American connection was removed, the CTAU incorporated it into other elements including four statues of famous Irish-Catholics in American history. The men chosen for this honor were Commodore John Barry, founder of the United States Navy, Archbishop John Carroll, first Bishop of Baltimore, Father Matthew, founder of the total abstinence movement in Ireland and America, and Charles Carroll, signer of the Declaration of Independence.[3] 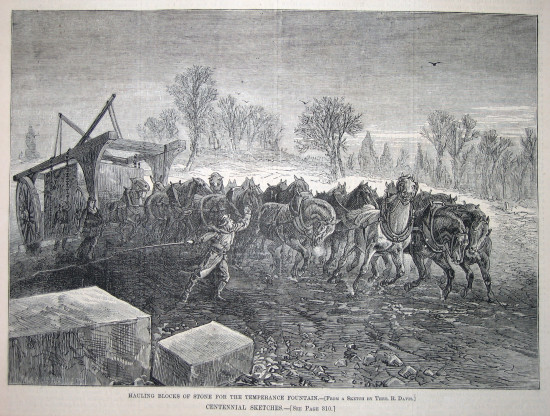 The committee in charge of the fountain began to accept proposals for the statues in October of 1874. They choose Herman Kirn, a German sculptor, to create the five statues by April 1876 agreeing to pay $10,275 for the work.[4] Since there was only two years to complete the project, the committee also hired contractors for other parts of the fountain, such as Hobbs and Sons for the structures, basins, and pedestals and Comber and Co for the granite work.[5] Work began on the fountain on July 5th 1875 with the groundbreaking, giving the workers only a year to finish the construction.

In order to pay for the project, the Philadelphia chapter of the CTAU began to have public rallies to raise donations. While they were able to raise $11,000 by 1875, the committee still needed more money and so reached out to the CTAU for support.[6] However, many other societies in the CTAU were reluctant to fundraise for the project because they saw it was a purely Philadelphia endeavor.[7] Due to this concern, the entire CTAU had raised barely half of what Philadelphia did in the same time.[8] In order to make up the difference, at the fifth annual convention the CTAU passed a resolution for every society to raise one dollar per member in order to help cover the costs.[9] By the time the fountain was completed it would end up costing $54,000, with the statues going $5,000  over budget.[10]

As the centennial year approached, the fountain was still far from completion as none of the statues were finished and only a fourth of the granite work was done. Indeed, it was not until April of 1876 that Kirn completed the first statue of Commodore Barry and since Kirn was working in Germany, it did not reach Philadelphia until June. There were a number of reasons for the delays including payment debates between the CTAU and Kirn as well as problems with the marble that Kirn received.[11] Due to these delays, when the CTAU had the official dedication and celebration parade on July 4th 1876, only Barry was installed. However, the rest of the fountain was ready, so Governor John Carroll of Maryland was able to turn the water on, which flowed into the 16 drinking basins.[12] 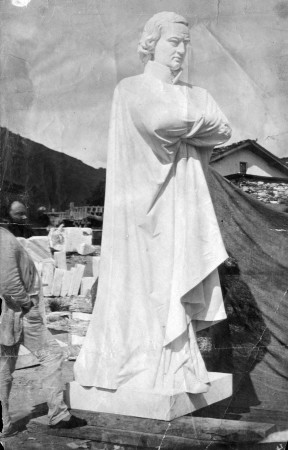 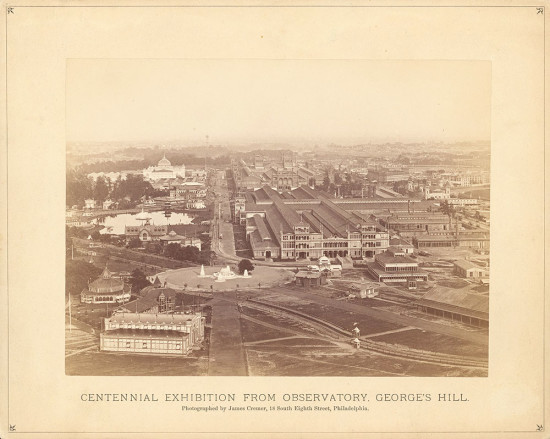 As the centennial year and the exhibition came to close, the fountain still remained unfinished. It would not be until March of 1877 that the other three corner statues were finished and the statue of Moses would not be installed until July 4th 1877, over a year late.[13] Despite this, the fountain was considered a huge success with one newspaper stating that it was an “expression of the sterling patriotism which has ever characterized the Catholic Church in America.”[14] While the Centennial Fountain was not ready for the centennial and now no longer functions as a fountain, it still stands a monument to the Catholic Total Abstinence Union and the work of Catholics in America. 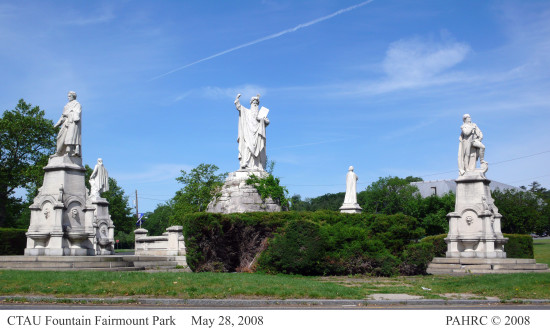 Visit the archives to see more images and information on the building of the fountain and the centennial celebrations.

Your ticket for the: The Centennial Fountain