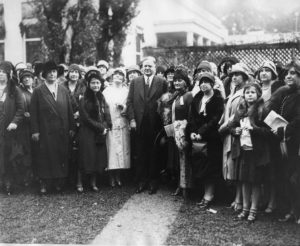 Members of the National Council of Catholic Women with President Hoover at the White House, 10/17/1929

Lay women associations have a long history in the Catholic Church. One such organization is the National Council of Catholic Women (NCCW). Unlike other female groups, the NCCW was founded in 1920 as part of the National Catholic Welfare Council, a predecessor to the United States Conference of Catholic Bishops.[1] The United States bishops created the NCCW as a way to better organize other regional and local women groups. In this way, it would serve more as an umbrella organization to help coordinate action between associations rather than a local group focused on a single issue.[2] Indeed, the NCCW saw itself as a federation seeking to unite and strengthen local groups, not to be in competition with them.[3]

When the NCCW began, there were 264 women’s groups that affiliated with it. Structurally, the National Council of Catholic Women had regional providences, normally named after the various archdioceses around the United States. Each providence would elect a president to represent all the affiliated groups to the national council. Despite being created by the bishop conference, many bishops chose not to have its lay organizations join, including Cardinal Dougherty.[4] Because Philadelphia did not join, the Philadelphia Providence of the NCCW was normally led by either the Diocese of Pittsburg or the Diocese of Harrisburg, both of which were quite active in the NCCW.[5] 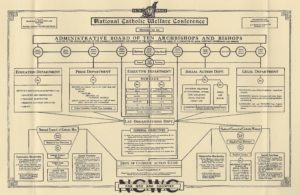 Flowchart with the breakdown of the National Catholic Welfare Conference hierarchy. The National Council of Catholic Women is located in the bottom right-hand corner.

One of the functions of the NCCW was to speak on behalf of Catholic Women to the federal government. The NCCW lobbied for various positions, aways seeking to protect women and the family. To that end, it supported such policies as a minimum wage but lead opposition to legislation like the Equal Rights Amendment.[6] Another goal of the NCCW was to provide guidance to regional and local groups through the publishing of a monthly magazine and pamphlets in order to inform its affiliated groups on topics from how to organize a study clubs to the promoting of education through PTAs.[7] They also operated a social service school out of Catholic University and during the 1930s and 1940s had a special focus on youth movements and leadership through a weekly radio broadcast.[8] 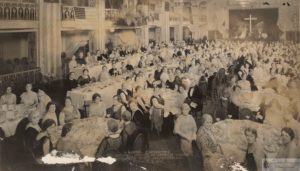 During Cardinal O’Hara’s time as archbishop, Philadelphia still remained separate from the NCCW; however, he was more receptive to the group and often wrote of his admiration for their work.[9] Indeed, under O’Hara local groups were able to join regardless of the official position of the archdiocese. Thus, while Pittsburg had over 200 affiliated groups and every woman’s group in Harrisburg was a member, only four groups in Philadelphia were connected to the NCCW.[10] It would not be until Cardinal Krol, that the archdiocese showed interest in joining. However, because of his involvement in major events like the Second Vatican Council, Krol was not able to focus on the NCCW until the end of the 1960s.[11]  Come 1963, there were 115 dioceses and almost 14,000 organizations associated with the NCCW.[12]

While for much of its early history the Archdiocese of Philadelphia did not join, as the years went by the National Council of Catholic Women continued to grow and serve the lay women of the United States. The NCCW original mottos were “For God and County” and “Faith and Service,” both of which shine through its long and continued history.

Your ticket for the: National Council of Catholic Women