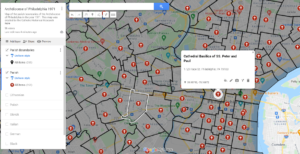 Screenshot of the 1971 parish map

Over the past few months, CHRC have been working on a parish mapping project. Taking inspiration from a similar project from the Archdiocese of Boston, we have constructed maps of what the parish boundaries used to look like over various times in the Archdiocese of Philadelphia's past. The main goal of our mapping project is to aid genealogists and other researchers in determining which parish someone most likely belonged.

For our project we decided to multiple maps reflecting various points in the history of the archdiocese. The first map we created was for the year 1971. This year was chosen since it was the year when the archdiocese had the most parishes in its history. It is important to note that our project only looks at the current five counties that make up current the archdiocese. It does not include areas that were once part of the archdiocese but are now part of another diocese. From the 1971 date it was decided to go back fifty years from that to 1921 and then another fifty years to 1871. (Update: Due to the lack of historic data on boundaries, the decision was made to map the parishes in 1891 instead of 1871).

We worked with the Office for Parish Service and Support to first obtain the data on what the parishes boundaries look like now. From there, we began the process of going through the primary sources to see how those boundaries have changed over time. The main source for this project was the Catholic Directory of the Archdiocese published every year. Other important primary sources included, bishop correspondence, the Consultor minute books and a hand written parish boundary book. 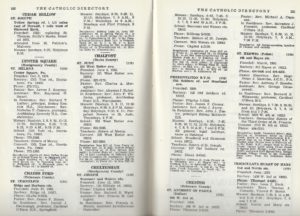 Excerpt from the Catholic Standard Directory

Once we had data on the boundaries in 1971, the first step was to import the current map boundaries to our google maps account. This way we would not have to redraw the boundaries for parishes that have stayed the same since the 1970s. Comparing the 1971 map to the current map shows the areas that have experienced a decrease in the Catholic population as well as a decrease in the ethnic parishes. In total, 123 parishes closed during the fifty years between the two maps.

While the 1971 map is complete and ready to be used by researches, the 1921 and 1871 maps are still being built. These maps have proven more difficult to construct because of the lack of clear boundaries. For instance many of the suburban or ethnic parishes do not list any boundaries at all, while others list the boundary without giving any clear streets or locations, such as "bordered on the north by x parish". This lack of data has required us to dig deeper into the records, looking at parish histories and past issues of the Catholic Standard and Times of both the parish in question and parishes that were later created from the parish. By doing so, we have started to fill in the gaps. 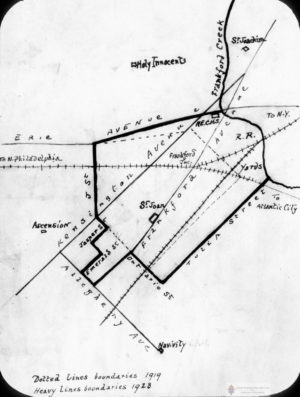 Another interesting obstacle that we have had to overcome is the change in the landscape and names of places. Many of the locations or names of streets that were used to describe the boundaries of a parish have either been removed or have changed over the years. When this has happened, we have been able to consult old maps of the cities and counties to determine where that corresponds to on our modern maps. Some of these changes are easy to find, such as Columbia Avenue now being Cecil B. Moore Avenue. However, others are a bit more challenging to track down, such as "the north end of the Brennan property" as a boundary for St. Mark, Bristol.

The completed 1971 map and soon to be completed maps from the 1920s and 1870s will provide a valuable resource to all those studying the history of the Catholic Church in the city of Philadelphia and the neighboring counties.

Your ticket for the: Parish Mapping Project