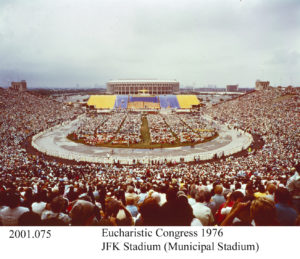 In 1976, Philadelphia hosted a major event unrelated to the bicentennial celebrations. It was the 41st International Eucharistic Congress (IEC), which brought Catholics together from around the world to celebrate and discuss a theme connected to the Eucharist. The history of the event dates back to 1881, when a one day congress was held in Lille, France and attended by 800 people. The event in Philadelphia would last for a week and be attended by over 1,500,000 people including 44 Cardinals and 417 bishops from around the world. [1] 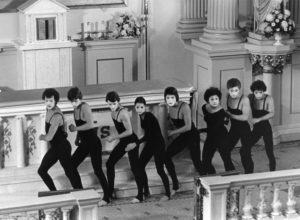 Production of Foolsgold. Halvey A443.011

Planning for the 41st IEC began back in 1974. The main discussion at that point was on what theme to choose for the focus on the congress. It would not be until April of 1975 that the theme of “The Eucharist and the Hungers’ of the Human Family” was approved by Pope Paul VI. The goal was to examine both physical and spiritual hungers.[2] Over the course of the eight days there would be liturgies and lectures exploring the understanding of the Eucharist. Each day of the Congress focused on a different kind of hunger, such as hunger for God on day one and hunger for peace on day seven.[3] Over the week, the Congress also featured art and exhibits, such as performances of Godspell, A Man for All Seasons, and Foolsgold, a mime performance at Old St. Joseph’s Church.[4] 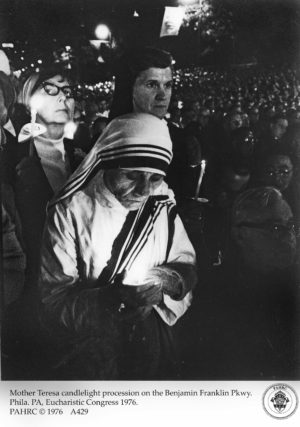 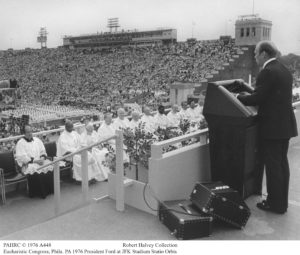 In addition to the numerous pilgrims, there were also a number of recognizable attendees who addressed the crowds during various parts of the week.  St. Teresa of Calcutta and Dorothy Day were panelists on a conference on Women and the Eucharist, although both were at first reluctant to speak because of their dislike of public speaking.[6] St. Teresa spoke of how we do not know or see the poor, whether it be in the streets of Calcutta or in our own homes, and that to address it “love must begin in our hearts, [and] our homes.”[7] Other attendees included the future Pope John Paul II who gave the homily at the Mass for Freedom and Justice in Veterans Stadium.[8] The Congress was even attended by secular leaders such as President Ford, who spoke of the importance of freedom and the Church’s work for peace at the closing Mass before 96,000 people at JFK Stadium.[9] 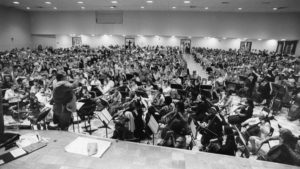 The Congress has some lasting effects on Catholics. One of the main programs that came out of the 41st IEC was Operation Rice Bowl, which raises money every year during Lent to fight world hunger and poverty. The program had a pilot run in the Diocese of Allentown in 1975. When it was introduced leading up to the IEC it raised over 5 million dollars in just a few months.[10] To date Catholic Relief Services Rice Bowl has raised over $300 million.[11] Another lasting impact of the 41st IEC was a hymn writing contest that resulted in the popular “Gift of Finest Wheat,” used commonly as the Communion hymn during Mass.[12]

However, the IEC was not without some controversy. A mass for the military was held on the anniversary of the dropping of the atomic bomb on Hiroshima. This caused some outcry from pacifists, such as Dorothy Day.[13] Despite this the IEC was considered a huge success and marked an important chapter in the Catholic Church’s history in Philadelphia.

To learn more about the International Eucharistic Congress visit the archives to explore the various items in our collection.

Your ticket for the: 41st International Eucharistic Congress