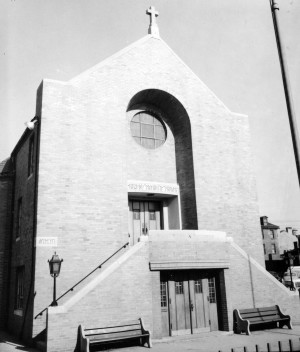 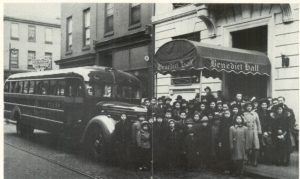 Members of the Catholic Chinese community using the St. Benedict's Hall at 15th and Race for catechetical instruction and youth programs.

The story behind the building of a strong and vibrant Chinese Catholic community began in 1939 when Archbishop Paul Yu Pin of China visited Philadelphia.[1] He stayed at St. John’s Rectory, just south of Chinatown, and wanted to address the Chinese population. However, at the time there was only one Catholic Chinese family in the entire area.[2] In response to this and under the guidance of the Sisters of the Holy Trinity, who did social work in the area, Cardinal Dougherty gave permission to open a catechism center on 15th Street. The Archdiocese also set up a chapel at the CYO headquarters at 18th and Arch to be used for Sunday worship. After the first year, nine members of the community converted to Catholicism, with 58 joining the following year.[3] 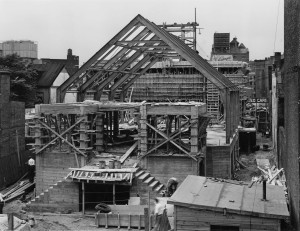 With the increase in membership, Msgr. Kavanagh, in charge of missionary work, wished to build a church for the Chinese community. Henry Dagit and Sons, who built many churches in Philadelphia, such as St. Francis de Sales and St. Malachy’s, worked as the architects.[4] The church was dedicated on October 5, 1941 by Cardinal Dougherty and Cardinal Thomas Tien Ken-Sin of Peking.[5] The church was established as a branch of St. John the Evangelist and has since grown to include a school and a convent. By 1966, the Catholic community had expanded, with 649 baptisms being performed as well as 86 marriages.[6] 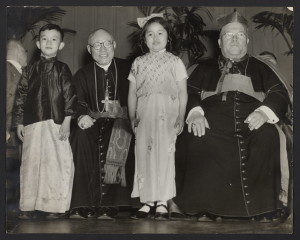 However, it was at this that time the existence of Holy Redeemer was threatened by city plans for the creation of the Vine Street Expressway. The parish's 25th anniversary book shows the community was preparing for the destruction of the church when it stated that “the buildings do not constitute the holy reality we call a parish… the real Holy Redeemer is made up of all the people.”[7] However, there was immense pushback from the Chinatown community to the plans, which lead to the creation of the Philadelphia Chinatown Development Corporation to save the church and other parts of Chinatown. After numerous town hall meetings and protests, including occupying buildings to stop demolitions, the State of Pennsylvania was eager to resolve the problem.[8] Officials offered the Archdiocese one million dollars to move the church and also tried to redesign the project to spare the church but such a plan would have left Holy Redeemer isolated from the community it served.[9] Due to this, the Archdiocese and the community were not interested in such a move. After a;most 20 years of delays and negotiations, in 1983 construction began on a smaller version of the expressway saving Holy Redeemer.[10] The parish's members have continued to fight for the protection of the community being involved in successful efforts to block the construction of federal prison and a sports stadium within Chinatown.

Holy Redeemer has continued to grow and thrive, serving as a bedrock in the Chinese community. The church has provided community programming including a free health clinic and English language classes to all members of the Chinatown community.[11] The school, open to both the Catholic and non-Catholic communities, offers both American and Chinese education, with English, Mandarin, and Cantonese being taught. [12]   Having recently celebrated its 75th anniversary, Holy Redeemer looks to continue its role as a center for Catholic life in the Chinese community.

Your ticket for the: Holy Redeemer Chinese Catholic Church