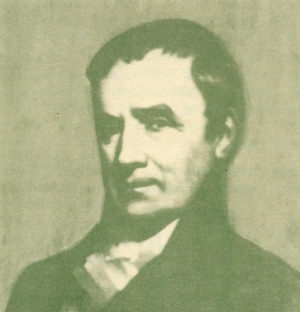 A major figure in the fields of literature, religion, and economics in the post Revolution America, has often been overlooked and forgotten. That figure is Mathew Carey, an Irish Catholic immigrant who helped shape the intellectual landscape of Philadelphia.

Born on January 26, 1760 in Dublin, Carey entered a printing apprentice at the age of 15.[1] He wrote his first essay in 1777 against dueling but soon had to flee Ireland because of an anti-Penal Laws article he wrote.[2]  Arriving in Paris in 1779, the connections that Carey would make there would change his life forever. First, he began working for Benjamin Franklin in his Paris printing shop. From there he would become friends with Lafayette, who would help Carey set up his first newspaper in America.[3] After a few years, Carey would return to Dublin and start a paper called the Volunteer’s Journal, which was radically pro-Irish and anti-English. In 1784, after writing an article attacking Parliament, Carey had to flee to America disguised as a woman to avoid arrest.[4] 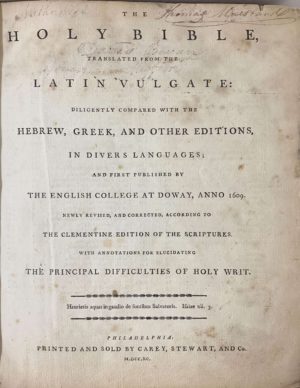 Once in Philadelphia in the late Fall of 1784, Carey started a newspaper thanks to a gift of $400 from Lafayette. The Pennsylvania Evening Herald operated as a bi-weekly paper that gained a wide subscriber base because Carey would publish the debates in the PA House Assembly. Two years later, he published American Museum, the second magazine in the country The publication focused on American literature, which lead George Washington to say that “no more useful literary plan has ever been undertaken in America.”[5] Contributors included Benjamin Franklin and Benjamin Rush and helped lead to an increased interest in American literature.[6]

An even larger impact on the American literary scene was Carey’s book company, which was described as the “greatest publishing and distributing firm in the country.”[7] In addition to publishing American works, Carey was a major player in importing European works, being the first to publish Walter Scott and Charles Dickens in the United States.[8] It was through is publishing company that Carey was able to publish the first English translation of the Catholic bible in America in 1790.[9]

Through his printing company, Carey was able to publish over 150 essays defending a wide range of topics that were important to him. The one that took up almost half of his writings was in favor of protective tariffs for the United States emerging manufacturing economy. His views made him a strong supporter of the War of 1812, as he believed it was the only way to secure American economic freedom.[10] Among other economic interests, Carey called for the creation of a canal system along the Delaware and Chesapeake Rivers as well as the unpopular view that a centralized bank was good for American credit.[11] 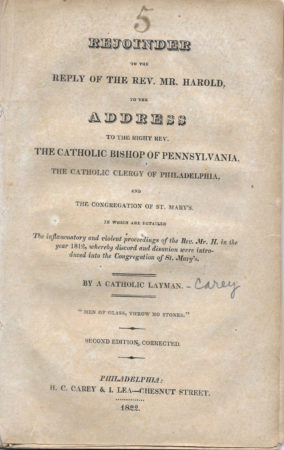 As an Irish Catholic, Mathew Carey was deeply involved with both groups in the city of Philadelphia. He acted as the president of a society for the protection of Catholic orphans and founded the Hibernian Society for the aid of Irish immigrants, which would later merge with the Friendly Sons of St. Patrick.[12] He also was the vice president of the Society for the Defense of the Catholic Religion from Calumny and Abuse, which sought to publish books and pamphlets to “refute the calumnious accusations alleged against the Catholics.”[13] In 1821, Carey also found himself in the middle of the Hogan Schism of St. Mary’s parish. Publishing essays under the title of a “Catholic Layman,” Carey supported a compromise between Hogan and Bishop Conwell. In his writings, Carey believed that Conwell was to harsh in his judgements and that Hogan should be allowed to continue to lead the parish as long he as submit to Conwell.[14] Carey even wrote to Conwell on multiple occasions offering to act as a mediator between the two camps; however, the papal bull siding with Conwell limited any attempt to negotiate the differences.[15]

Mathew Carey retired from his publishing company in 1824, having passed it on to his sons. In retirement he continued to write and publish essays particularly on Irish land reform and religious issues.[16] Carey passed away on September 16, 1839 after succumbing to injuries when his carriage overturned. He would be buried in St. Mary’s cemetery next to his wife, Bridget.

Your ticket for the: Mathew Carey