May 8th 2020 marks the 75th anniversary of VE day, the end of the second world war in Europe. In honor of the anniversary, this month’s blog will look at some of the WWII material in the CHRC collections. Majority of our records from WWII come from Cardinal Dougherty’s collection, which contains correspondence with soldiers and chaplains fighting on both fronts.

From the start of the war, Cardinal Dougherty was involved in the war effect, as seen most clearly with the Victory Mass he organized in November of 1942. He also took an active interest in protecting Catholic churches across Europe from destruction. For instance, correspondence from the White House revealed that Dougherty sought to prevent sites like the shire of Saint Theresa at Lisieux from being bombed during the liberation of Europe.[1] 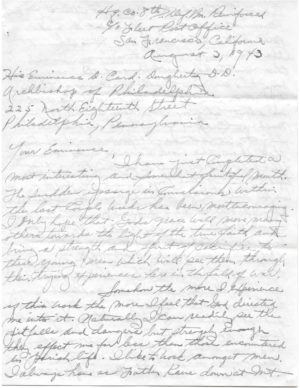 One of the main pieces of correspondence from soldiers is between Cardinal Dougherty and his grandnephew, Harry Boylan. The letters cover Boylan’s time from basic training to the end of the war. Many of the letters deal with family matters or Dougherty giving Boylan advice, such as the need to work on his penmanship. On a few occasions, Boylan goes into details on some of his wartime experiences, for example seeing the German costal fortifications in France. He stated in the letter that the coast itself was like New Jersey, however, “all of the beaches are one mass of tank barriers and fortifications which go as far as you can see.”[2] Boylan wrote to Dougherty in May of 1945 that there was little American celebrations on VE day as many believed they would soon be sent to the Pacific theater in the war against Japan.[3] Throughout his letters, Boylan told of the work his chaplain would perform, including daily Masses while stationed in France.[4]

Dougherty also received letters from other soldiers most of which would complement the work of their chaplains. One such letter from a sailor who was from St. Patrick’s parish in Philadelphia stated that he would assist the chaplain with the Catechism classes as there were many wanting to convert. He further stated that of Catholics who had left the faith “the great majority are willing and many are anxious to return to good standing.”[5] This highlights the importance that servicemen placed on religion and highlights the old saying that there are no atheists in the foxholes. 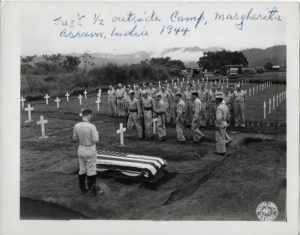 The other major part of Dougherty’s WWII correspondence deals with chaplains, both from an administrative national level and an individual priest level. A common theme of the correspondence with Bishop John O’Hara of the Military Ordinariate (later Cardinal O’Hara of Philadelphia) was that there were never enough chaplains to go around. In a letter from May 19, 1942, O’Hara stated that they had over 1,000 Catholic chaplains but were in need of 600 more or else risked losing those spots to Protestant chaplains.[6] O’Hara’s letter also included a list breaking down the number of chaplains from each diocese, in which Philadelphia had the second most with 51. As the war continued that number would increase to 68, unfortunately eight of those Philadelphia priests would die in the war, the most of any U.S. diocese.[7] 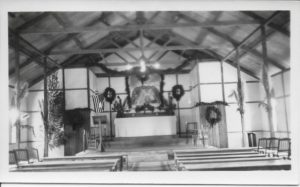 From his priests, Dougherty would often receive monthly progress reports and letters, which illustrates the daily routine of a chaplain. Many of them wrote highly of the mem they served, with Father John Larkin stating that he was impressed by their “sincere effort to lead good Catholic lives under somewhat difficult circumstances.”[8] Larkin often wrote that many non-Catholics would attend Mass and he had high numbers of confessions. He did complain about the difficulty in attending to all the men under his care as he had no transportation to get to those stationed away from the main base. This meant that some servicemen had to go six weeks before he was able to visit them.[9]

Another chaplain, Father Aloysius McGrann, described his experiences at field hospitals in North Africa and Italy. After landing with the main forces in Italy in September of 1945, Father McGrann moved up the peninsula through Cassino, Anzio, and Bologna, attending to not only the Allies but captured German and Italian prisoners. After the liberation of Rome, he even had an audience with Pope Pius XII.[10] 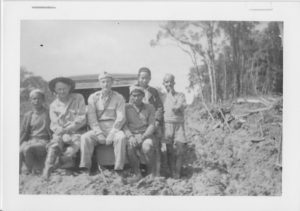 Chaplain Meyer on duty along the Ledo-Stilwell Rd. Assam Burma No Hills.

While not a part of the Dougherty collection, Philadelphia priest Father Louis Meyer’s collection contains his personal material from his time as a chaplain in the Pacific. (This is the same Meyer that took pictures of his fellow seminarians burying the dead during the Spanish Flu.) While he has little correspondence relating to his work, he photos of his service in WWII offer an important window into chaplain life. These photos show his chapel as well as life around a camp in the jungles of Southeast Asia.[11]

As we commemorate the end of WWII in Europe, it is important to recognize and remember the service and sacrifice of Catholics during the war

Your ticket for the: Catholics in WWII