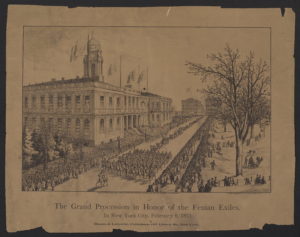 "The Grand Procession in Honor of the Fenian Exiles," https://omeka.chrc-phila.org/items/show/7066

The Catholic Church has a long history of opposing secret societies, partly because of the oaths of loyalty involved in such groups. Nevertheless, during the 1800s there were two major organizations that attracted numbers of Irish Catholics: the Fenian Brotherhood and the Molly Maguires. The Fenian Brotherhood was founded in 1858 as a national movement for the liberation of Ireland from English rule.[1] The Molly Maguires were likely founded in 1863 and were a regional labor organization in the anthracite coal area of Northeastern Pennsylvania, mainly in Carbon and Schuylkill counties.[2]

The Fenian Brotherhood was a military group that sought the overthrow of English rule in Ireland. Their annual operating budget spent tens of thousands of dollars on their war department, including buying surplus arms and armaments from the Civil War.[3] Their first major action was an invasion of Canada in 1866, which ended in failure and pressure from the United States for no further action.[4] Division within led to two more failed invasions of Canada in 1870 and 1871.[5] Thanks to the collections of theAmerican Catholic Historical Society, we have the correspondence of the Fenians’ treasurer, Francis Gallagher, which documents the planning for the second invasion and the concern among most of the officers that the plan was doomed to fail.[6] In a letter to Gallagher from Richard McCloud, Secretary of the Treasury, Richard spoke of the need of “holding the arms out of his [John O’Neill, President of the Fenians] reach,” so to prevent unauthorized raids in Canada.[7] 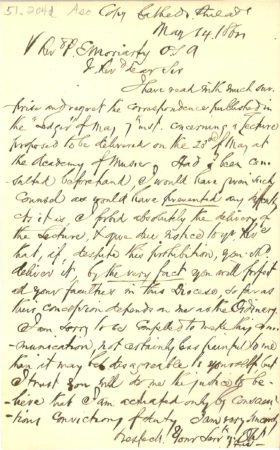 The Molly Maguires was organized as a labor force against the coal mines. In the early days of labor unions and strikes, the Mollies chief tacit was the murder of mine bosses.[8] Starting in 1863, they began a decade long war against the mines. The conflict culminated in the execution of ten Mollies on June 21, 1877 for a series of murders in 1875.[9] The main witness was a Pinkerton detective who infiltrated the group and testified as to having witnessed the murders.[10] The Molly Maguire papers at CHRC include letters from those who attended the trials and who spoke of concern of witnesses lying to give the prisoners alibis.[11]

While different in scope and agenda both groups had conflict with the Bishop of Philadelphia, Rev. James Wood. During the height of the Fenians, they used the Irish paper, The Universe, to falsely claim that the church ordered they were “not to be disturbed” in their activities.[12] This resulted in a letter to Bishop Wood from the Vatican in which the Vatican stated that any such order was “utterly false.”[13] Further conflict arose when a prominent Augustinian priest, Father Moriarty wanted to give a lecture at the Academy of Music on May 23, 1864 on the topic of “the English have no right to rule in Ireland” in support of the Fenian cause.[14] However, Wood wrote to Moriarty “forbid[ing] absolutely the delivery of the lecture” or else “forfeit all your [Moriarty’s] faculties in the diocese.”[15] Father Moriarty choose to disobey his superior and resigned his faculties the next day on May 15.[16] Over 5,000 people crammed the Academy with another 10,000 outside trying to hear the fiery speech. It would not be until December that Moriarty would seek forgiveness and be regranted his faculties by Wood.[17] 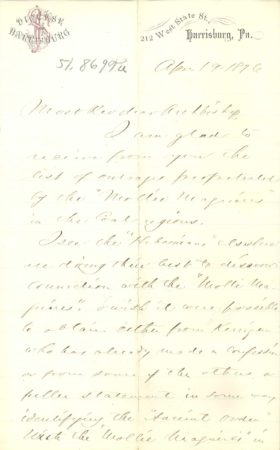 Archbishop Wood (became an archbishop in 1875) condemned the Mollies in published a letter in 1876, where he declared they were “evil associations,” which sought to “blind and deceive the faithful.”[18] Wood equated them with the Ancient Order of Hibernians, which on a national level was not tied to them but in Schuylkill County were believed to have close ties. This sentiment was echoed by the Bishop of Harrisburg, Jeremiah Shanahan, who in a letter to Wood spoke of the “outrages perpetrated by the Mollie Maguires,” and the suspicion that the AOH and the Mollies were connected.”[19] The belief that the two organizations were one and the same, caused the national AOH to have to condemn the Mollies at their national convention in order to separate themselves from the murders.[20]

Come the 1880s, both secret societies had lost much if not all of their influence and support, partly from the opposition from the Church but mostly from the groups’ failures in fulfilling their goals. Their histories show the attraction such groups had to Irish immigrants and the struggle the Catholic Church faced in combating it.

[3] Proceedings of the Senate and House of Representatives of the Fenian Brotherhood, in Joint Convention at Philadelphia, PA, (New York: D.W. Lee, 1868), P005.0145

[8] Report of the case of the Commonwealth vs. John Kehoe et al. : members of the Ancient Order of Hibernians, commonly known as "Molly Maguires," indicted in the Court of Quarter Sessions of the Peace, for Schuylkill County, Penna., (Pottsville: Miners' Journal Book and Job Rooms, 1878), P001.1567

[10] The great Mollie Maguire trials in Carbon and Schuylkill counties, Pa. : brief reference to such trials and arguments of Gen. Charles Albright and Hon. F.W. Hughes, in the case of the Commonwealth vs. James Carroll, James Roarity, Hugh McGehan, and James Boyle, indicted for murder of Benjamin F. Yost, (1876: Pottsville, Chronicle Book and Job Rooms), P001.1561.

Your ticket for the: Irish Catholics and Secret Societies