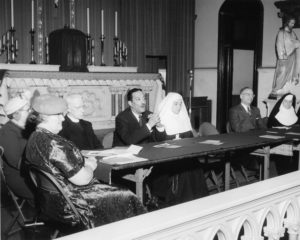 In the 1930s, there was a growing interest in cooperation between white and black Catholics to work against prejudice and towards interracial justice. This led to the creation of the Catholic Interracial Council of New York in 1934 by Father John LaFarge, S.J.[1] LaFarge hoped that local chapters would be opened across the country to meet the needs of each individual diocese. This grassroots style structure would then work within the Catholic Church to achieve social justice.[2]

The first such group in Philadelphia was founded three years later in 1937 also by Father LaFarge. The Catholic Intercollegiate Interracial Council (CIIC) was organized at Saint Joseph's University.[3] Five other local colleges would also join the council: Villanova University, La Salle University, Rosemont College, Immaculata University, and Chestnut Hill College.[4] One of the people in attendance at this first meeting was Mrs. Anna McGarry, who would be a major player in interracial programs in the city of Philadelphia throughout the following decades.[5] 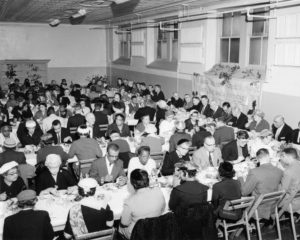 Anna McGarry, an Irish Catholic, was born in Philadelphia on March 17, 1894. In 1920s, she began to dedicate her life to fighting against discrimination against African Americans, after witnessing unfair housing practices in her North Philadelphia neighborhood.[6] Following the creation of the CIIC, McGarry cofounded the West Philadelphia Interracial Forum (WPIF) at St. Ignatius parish in 1937.[7] The organization had roundtable forums as well as operated a recreation and education center.[8]

McGarry and the WPIF also had a focus on fighting for fair-hiring practices, such as pressuring the Philadelphia Transportation Company to expand their hiring for non-menial jobs to black employees. In 1944 once the PTC began to make changes, a transportation strike was called by the white employees in protest. McGarry, the WPIF, and other religious groups then pressured the Irish Catholic union leaders to stop the strike.[9] However, the  strike would ultimately end after a Federal government intervention. 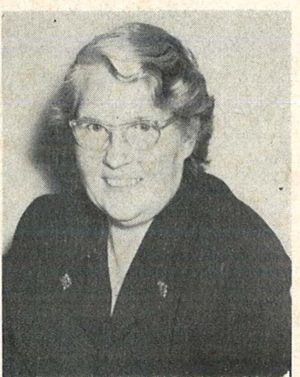 In 1946, CIIC and the WPIF were combined into one organization when McGarry and Father Cunnie formed the Catholic Interracial Council of Philadelphia (CICP) out of St. Elizabeth Parish in North Philadelphia.[10] Father Cunnie saw the council as a means of providing programs to aid the African American families within his parish. Soon the CICP started a lunch program, kindergarten, clothing cooperative, credit union, and adult education classes.[11] The council also made use of a partnership with Harriett Recording Studio and WJMJ to broadcast every Sunday at 4:15 the “Talent and Discussion Program.” The program was a forum for members of the CICP to share work and progress on interracial justice.[12] Through a digitization project many of their recordings are now available to listen to on our Omeka site.

One of the Catholic Interracial Council of Philadelphia’s first major successes was helping form the Philadelphia’s Fair Employment Practices Commission, on which Anna McGarry served as vice president.[13] This city government commission sought to end discrimination in employment and was later formed into the Commission on Human Relations.[14]

The Catholic Interracial Council would also play a large role in easing the racial tensions that erupted in Levittown in 1957 over the first Black family moving into the neighborhood.[15] The CICP denounced the violence enacted against the families by their white neighbors and focused on easing the tensions. Thanks to the work of the CICP, the controversy was settled and over time Levittown continued to desegregate. 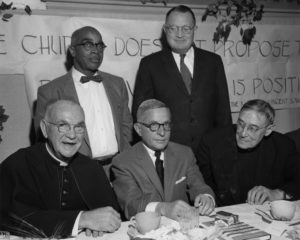 The following year in 1958, Father Cunnie passed away, leaving the council without a spiritual advisor, which was necessary to be recognized as an official Catholic organization by the Archdiocese.[16] However, at the time the chancery was unwilling to supply a new priest.[17] Due to this impasse, the Catholic Interracial Council struggled to continue and debated closing. In 1959, McGarry retired from the organization, which marked the unofficial end of the council. The CICP continued to have sporadic informal meetings until 1961, when it officially ceased.[18] With the installation of Archbishop John Krol, there was some hope for a revival and Father LaFarge wrote to him to reinstate the CICP.[19] However, Krol instead organized the Cardinal’s Commission on Human relations, which would have similar aims as the CICP but would be under direct control of the Archdiocese.[20]

Spanning three decades, the Interracial council movement had a large impact on the Catholic Church and relations between whites and blacks. The councils sought to better integrate both groups within the church and strived to achieve social justice within local communities.

Your ticket for the: Catholic Interracial Council