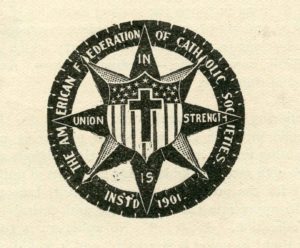 At the turn of the 20th century, Catholic lay groups throughout the country sought to create an umbrella organization to help coordinate activity between several overlapping societies, such as the Ancient Order of the Hibernian, the Knights of Columbus, and the Total Abstinence Union. Plans for such a national organization can be traced back to 1890 with a call from the Pittsburgh Diocesan Council. They hoped that a national federation would be a “timely alliance… to facilitate and conserve these grand objects and noble aims” of the various Catholic societies.[1] However, the plan did not get any momentum and it was not until 1899 when the Knights of St. John again raised the call that was finally answered.[2] Two national conferences were held in New York and New Jersey in 1900 and 1901 to lay the groundwork for the new organization. It was at these sessions that the name, The American Federation of Catholic Societies (AFCS), was decided on as well as the new group’s constitution.[3]

A few months later in December of 1901, the first national convention of the American Federation of Catholic Societies was held in Cincinnati. At the conclusion, it was decided that the AFCS’s goal was to unite the all these societies so that they might do “better work than ever before for God, for country, and for truth.”[4] As an organization, the Federation was to be set up with the national branch and then both state and county branches underneath it. Interestingly, early proposed plans for the constitution had branches organized around dioceses but the Federation quickly decided to go forward with secular boundaries for local branches.[5] There were other national federations of Catholic societies but those were organized strictly along ethnic lines. This was the first attempt to unify all Catholic societies whether they be Irish, German, or Italian. 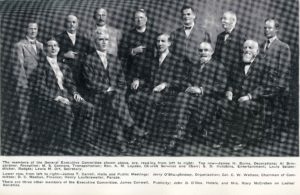 From the beginning, the AFCS made clear it had no desire to control the lay societies that would become affiliated with it but rather use its resources to advocate for Catholic positions, particularly to the various federal and state governments. However, this ran the risk of the Federation becoming too political, which led to the constitution of the group declaring that it would not engage in partisan politics nor endorse any candidates.[6] However, some members of the clergy were nervous that this would give rise to anti-Catholic sentiment that the Church had experienced in the mid-1800s.

Despite these concerns a number of archbishops and bishops supported the new organization and it slowly started to expend. In 1903, the Pennsylvania Federation was founded with the goal of “cementing the bonds of fraternal union among the Catholic laity and the Catholic societies, fostering and protecting Catholic interests and work of religion, pity and education.”[7] Archbishop Ryan spoke at Philadelphia’s Federation founding, stating that he was hesitant to support it but now he saw that “there cannot possibly be any objection to the Federation, since its objects are … to make us better men and better citizens.[8] 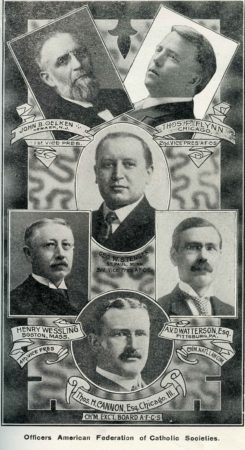 In 1904, there were 39 states that were affiliated with the AFCS with a total of 1.5 million people and the local PA branch had about 160 societies associated.[9] The federation experienced mainly growing pains, indeed, at the 5th annual convention they complained about the number of societies not fully paying their dues which made it difficult to fund the work.[10] One of the committees at both the national and state level that had the most impact was the legislative committee. These committees would meet to review bills and the propose changes or voice opposition. The national committee campaigned against loosing divorce laws and supported legislation that aided non-public schools.[11] The local county branches of the AFCS would often host lectures and society picnics.[12] However, in Pennsylvania, many counties struggled to form county chapters, with only 11 counties having chapters in 1914. In many places like Columbia County, Catholics resisted joining the FCS because of concern over the perceived political problems of such a Catholic organization.[13]

With the outbreak of WWI there was a change in the national landscape, with the creation of the National Catholic War Council. The NCWC took the lead on coordinating Catholic action and after the war, the newly formed National Catholic Welfare Conference continued to take the lead. In 1923, the head of the Philadelphia branch wrote to Cardinal Dougherty to ask if the AFCS should be dissolved in favor of the NCWC.[14] Dougherty believed that the Federation should continue as it was since the local branches gave it the ability to know the local conditions and give the area its full attention.[15] Despite his endorsement, the AFCS would soon be absorbed by the NCWC and was effectively replaced with the National Councils of Catholic Men.

While it was a short lived organization of less than a quarter century, the AFCS was the first successful attempt to bring together Catholic societies from across the country.

[3] Proceedings of the American Federation of Catholic Societies of the United States, 08/1901, AC008

[4] Proceedings of Convention of the American Federation of Catholic Societies, 12/1901, AC008

[6] Constitution and By-Laws of the Federation of Catholic Societies, 1902, AC008

[9] Processing of the Second Annual Convention of the Federation of Catholic Societies of Pennsylvania, 06/1904, AC008A

[10] Processing of the Fifth Annual Convention of the Federation of Catholic Societies of Pennsylvania, 06/1907, AC008A

[13] Proceeding of the Thirteenth Annual Convention of the Federation of Catholic Societies of Pennsylvania, 07/1915, AC008A

Your ticket for the: American Federation of Catholic Societies