Benedict Club: A Home Away From Home 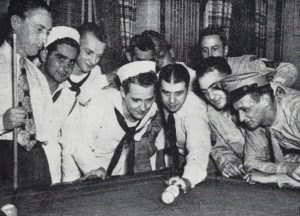 Jimmy Caras and Peter Tyrell, renowned pool champions, give a few pointers on a trick shot.

The Benedict Club was a refuge for servicemen in Philadelphia during both World Wars. Located at 157 North 15th Street, the club was named after Pope Benedict XV, who was pope during World War I.[1] By 1919, it was considered the largest such organization of its kind, serving over 3,000 meals a week and having sleeping accommodations for over 400.[2] The club also featured a library, a game room, and barber shop all of which could be used without cost to the servicemen. After the war it was run by the CYO to cater to all Catholic men before being turned into a rented hall.[3]

In summer of 1941, the United Service Organizations (USO) started a campaign to open clubs throughout the country to build and preserve morale of the military.[4] Cardinal Dougherty “heartily endorsed” the endeavor and pledged “his entire cooperation” since he saw it as a way to “thwart adverse influences and prevent our young men from being ruined physically and spiritually.”[5] The parishes of Archdiocese of Philadelphia raised roughly $25,000 in July 1941 for the USO campaign.[6] 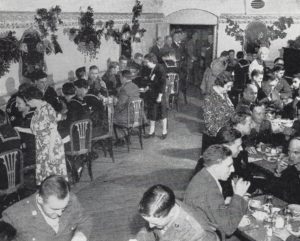 Sunday Dinner at the Benedict Club

Initially, a total of nine agencies opened USO clubs in Philadelphia, with the Benedict Club being run by the National Catholic Community Service.[7] The club officially opened on December 10, 1941. The planned party was changed to a more muted affair in light of the attack on Pearl Harbor two days prior.[8] 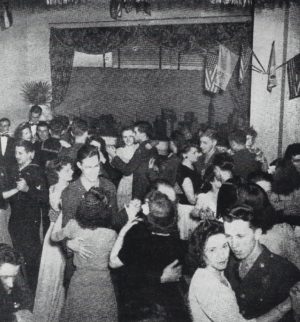 One of the many dances at the club

Unlike the Benedict Club of the First World War, the new Benedict Club was focused on entertainment not sleeping accommodations. Numerous famous singers and dances would perform at the club, including Guy Lombardo and Walter O’Keefe.[9] With an army of 6,000 female volunteers, the club had dances and entertainment every night from seven to midnight.[10] In the first year about 200 men visited the club each day and by 1943 that was up to 800.[11] The women volunteers, called the Morale Corps, would organize various themes for the dances as well as staff the offices and service desks and serve food and refreshments. The military men described the women as the “best dancers in the world” and that they would “make you feel you’re the tops,” showing that Benedict Club was successful in raising the morale of the servicemen who visited.[12]

Some members of the Morale Corps Aides

In addition to the nightly events, the club would offer other services. When it opened at noon, it would often have a line of men waiting to get in. The popular offerings included recording letters home on phonographs and a foot clinic staffed by the Philadelphia Chiropody Society.[13] The club would also offer meals, with the Sunday roast being the most attended. Over the years as the club became more popular, the cost of running it increased from $21,000 during the first year to over $50,000 during the height of the war. Entrainment and food would account for about 25% of all expenses.[14] 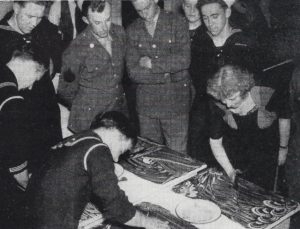 By the summer of 1946, the USO was looking to close many of the hundreds of clubs throughout the country due to the general demobilization.[15] The Philadelphia branch decided to cease funding the Benedict Club and the other agency clubs by the end of the year but let the organizations pick the date.[16] The Benedict choice to close on the 5-year anniversary of its opening, December 10, 1946. Over those years, over 1,300,000 servicemen walked through the doors of the Benedict Club into their home away from home.[17]

Your ticket for the: Benedict Club: A Home Away From Home

Benedict Club: A Home Away From Home