Building of the Cathedral Basilica of Saints Peter and Paul 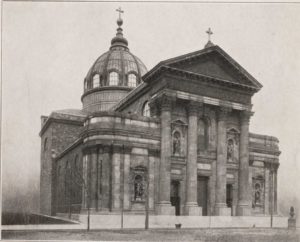 It is a truth universally acknowledged that a diocese must be in want of a cathedral. When the Diocese of Philadelphia was established in 1808, Bishop Michael Egan made Old St. Mary’s the first Cathedral of the diocese.[1] In 1837, Bishop Francis Kenrick tried to moved his seat to St. John the Evangelist, partly in response to the trustee issues at Old. St. Mary.[2] The following year St. Johns became the pro-cathedral while Kenrick explored options for the building of a separate cathedral for the Diocese. Eight years later on June 29, 1846, Bishop Kenrick announced plans to start building a new cathedral on the parkway.[3] This was a bold plan from Kenrick, since only two years earlier St. Augustine was destroyed during the anti-Catholic Nativist Riots. Furthermore, Kenrick did not want to take on debt for the project and hoped to raise the funds from donations from the Catholics of the diocese, which at this time numbered 60,000 in the Philadelphia area.[4]

Despite the possible challenges, things started off well. Napoleon Le Brun, who also built St. Augustine’s and St. Patrick’s, was hired as the architect.[5] The building quickly got under way with the cornerstone being laid on September 6, 1846.[6] However, soon after the money began to dry up. The Annual Report for the Central Committee of the Cathedral reported that only a small fraction of what they expected to raise had been donated. Nevertheless, the committee hoped that pride in the diocese would help raise the funds as they lamented that cities, such as Baltimore, Pittsburgh and Cincinnati, were “inferior to our own [but] have Metropolitan Churches.”[7] 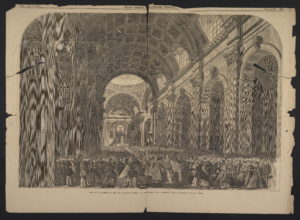 The lack of money led to a stop in construction in 1849 and the following year Le Brun was relieved of the role as architect and was replaced by John Notman and John Mahoney .[8] Over the next decade, work would continue in fits and starts and by 1859 the walls of the Cathedral would be completed.[9] Two years prior, seeing that the building would not be done for years to come, James Frederick Wood, then coadjutor bishop, ordered the building of a chapel that parishioners could use in order to maintain a sense of community.[10] When Wood, became bishop in 1860, he decided to allow for loans to pay to finish the Cathedral. With the securing of funds, work was able to continue uninterrupted so that it was finished within four years. On November 20, 1864 the Cathedral was dedicated before a large crowd, however, it would not be consecrated until 1890.[11] 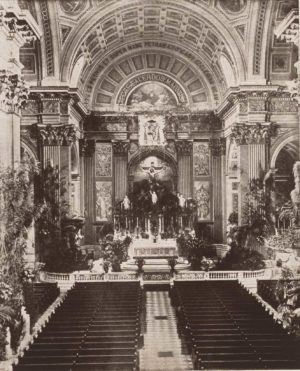 While the exterior of the building was completed, the interior was far from finished. Even at the time of dedication, the high altar was not finished and a temporary wooden one was used instead.[12] Furthermore, there was no art work or decorations adoring the walls or side altars. Over the coming years, murals and art would be added in piecemeal; however, this led to a disjointed aesthetic. Under Archbishop Edmond Prendergast, a remodel was undertaken by Dagit and Sons to give a unified design to the interior.[13] With this, the Cathedral was finally a finished seat for the archbishop.

In 1956, the interior would be redone again and twenty years later on September 14, the Cathedral would be raised to a minor Basilica.[14] Over the years, the Cathedral Basilica of Saints Peter and Paul has continued to play a central role in the celebration of Catholic life in the city of Philadelphia.

[1] A Brief History and Description of the Cathedral of SS. Peter and Paul, (Philadelphia: Archdiocese of Philadelphia 1917), 4

[4] Annual Report of the Central Committee of the Cathedral of SS. Peter and Paul, For the Year Ending December 31, 1846, 4.

[6] Virginia Dugan, A History of the Cathedral Basilica of Saints Peter and Paul, 1979, 6.

Your ticket for the: Building of the Cathedral Basilica of Saints Peter and Paul

Building of the Cathedral Basilica of Saints Peter and Paul