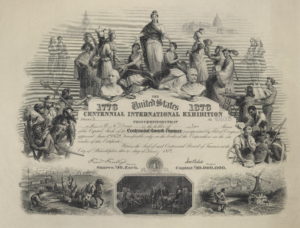 The International Exhibition of Arts, Manufactures, and Products of the Soil and Mine was held from May to November 1876 in Fairmount Park to mark the 100th anniversary of the United States. Called the Centennial Exposition for short, it was a world’s fair featuring displays from around the country and the world. Planning for the event began in the late 1860s and would be given Congressional approval on March 3, 1871.[1] Originally, the exhibition had to be paid for entirely through private funds so thousands of bonds were sold to raise money.[2]  However, the federal government eventually had to step in to supplement budget shortfalls in the event.[3] Before the Exposition opened, there was debate over opening the fairgrounds on Sundays. While it was decided to keep it closed, Archbishop Wood was in favor of it opening for a few hours in the afternoons. He believed that if the faithful had fulfilled their religious duty, then the fair would have a beneficial effect as an innocent relaxation of the soul and body.[4] 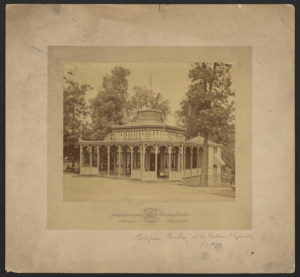 When the fairgrounds opened to the public on May 10, 1876, there were 190 buildings across 236 acres.[5] The largest building in the exposition was the Main Building, which covered 21 acres and featured exhibits and displays from numerous countries including Peru, Egypt, Japan, and Switzerland.[6] Other prominent buildings included: Machinery Hall, Horticultural Hall, Agricultural Hall, United States Building, Memorial Hall, and the Women’s Pavilion. 15 countries and 26 states also constructed their own buildings.[7] Of all the buildings, only two survived to today, Memorial Hall, which is now the Please Touch Museum, and the Ohio House.[8]

The opening of the Centennial Exposition was discussed in papers across the world. It was reported that 500,000 people attended the opening, including dignitaries such as the Empress and Emperor of Brazil.[9] The Exposition were reviewed quite positively and was said to be superior to the recent world’s fairs in Paris and Vienna.[10] However, the opening remarks by President Grant received mixed reviews. England’s Tablet described President Grant’s opening speech as of “excellent taste” while The Louisville Catholic Advocate declared that the speech was “very dull” and “much to their [the crowd’s] relief he got through in about ten minutes.”[11] 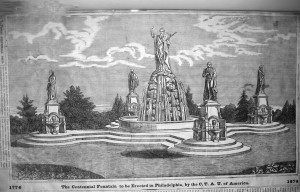 Catholics and their achievements were on display throughout the Centennial exposition. The main contribution to the events was the Centennial Fountain made by the Catholic Total Abstinence Union. The fountain which still stands near the Mann Center features statues of Moses, Archbishop Carroll, Charles Carroll, Father Mathew, and Commodore Barry. Among the exhibits, the Vatican had sent art and artifacts to be displayed in Memorial Hall, including mosaics of the Madonna and a tapestry of St. Agnes.[12] Other countries brought Catholic art, such as Spain’s display of the “Death of St. Francis of Assisi” and “Christ Blessing Little Children.”[13] Over the course of the six months the fair was open, other Catholic events were held both at the grounds and throughout the city. Speeches were held at various Catholic Churches, most of which spoke of the importance of religious liberty and faith in building America.[14]

By the time the International Exhibition of Arts, Manufactures, and Products of the Soil and Mine closed on November 10, 1876, over 10 million visitors had been through the exhibit grounds. The event proved to be a huge success for the city as well as for the Catholics in the archdiocese.

[4] Opening of the Centennial Building on Sunday Afternoons,” The Catholic Standard, SB1, 235.

[8] Joseph Gambardello, “What happened to the buildings from the 1876 Centennial in Fairmount Park?”, The Philadelphia Inquirer, May 7, 2019,  https://www.inquirer.com/news/philadelphia/centennial-exposition-1876-buildings-fairmount-park-20190507.html

Your ticket for the: Centennial Exposition