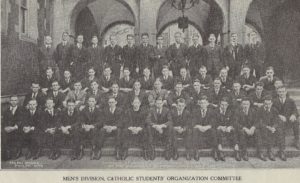 Newman Centers play a vital role in the spiritual growth of Catholics who attend non-Catholic universities  and colleges. The history of such centers is traced back to the University of Pennsylvania. In the year 1893, five students formed the first Newman Club with the purpose of giving “Catholic students at the University a chance to come together, to know one another, and to learn subjects of interest.”[1] They choose St. John Henry Newman as the patron because of his qualities of head, heart, and soul.[2] At the beginning, the club was organized by and for medical students but soon opened to the rest of the student body. The club would dissolve in 1905 but was reformed in 1913 as the Catholic Student’s Organization Committee. At that time, Father John Keough was appointed chaplain of the organization and helped grow the group.[3] 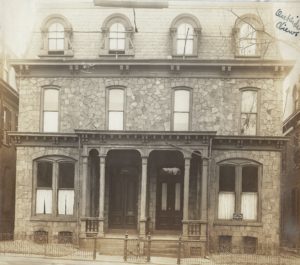 Father Keough’s first mission was to set up a place for the students to worship and meet. A house was purchased and named St. Bede Chapel. In 1917, it cared for almost 1,000 Catholic Students by offering two daily Masses, weekly Benediction, and religious retreats as well lectures on religion, ethics, and civics.[4]  By 1926, there were 1,600 Catholics attending University of Pennsylvania, which was greater than the total number of students attending the five local Catholic Colleges.[5] It should be noted that at this time two different Catholic organizations operated at the University of Pennsylvania. First was the Catholic Student’s Organization Committee (replaced the defunct Newman Club), and the second was the Guild of St. Luke, St Cosmas, and St Damian, which was a Catholic medical organization for both professionals and students.

Other Newman clubs would begin to open in Philadelphia area schools, including Temple and Drexel as well as many of the medical colleges such as Hahnemann and the Woman’s Medical College.[6] And by the 1940s, a majority of local non-Catholic colleges had their own Newman Centers from state schools such as Penn State to small private schools like Bryn Mawr College.[7] 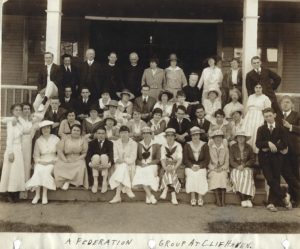 While the Newman club at Penn was reforming, across the country during the early 1900s, other students were forming Catholic clubs. In 1915, seven New York colleges created the Federation of College Catholic Clubs to unite these separate groups. [8]  Three years later it counted 19 members and would grow to 59 by 1924. The goal of the FCCC was to guide local chapters and to support the creation of new ones.[9] One avenue for this was the publication of periodicals, such as the Newman Quarterly (later Newman News), which ran from 1917 to 1947.[10] In 1938, the FCCC would change its name to the Newman Club Federation and by the 1950s would have 600 local clubs around the world.[11]

One of the main problems that faced Newman centers and similar Catholic college organizations was the nature of its identity. Were these organizations places of worship, social clubs, or educational/evangelical centers? The answer was they were all three at the same time. However, many centers would struggle to balance the religious nature of the organization with the more social aspects. While Archbishop Krol called for a greater emphasis on the theological nature of the centers, other leaders around the country stressed the community focus. [12] From the standpoint of the Catholic hierarchy, these Newman Center were vitally important in order to “safeguard their [the students’] Catholic devotion and establish means to keep alive in their souls their priceless Catholic heritage.”[13] Indeed, the importance of providing strong Catholic spiritual and educational support to students at secular colleges, led to the National Association of Newman Club Chaplains. The NANCC sought to better train and provide aid to the hundreds of full and part time chaplains working at the centers.[14]

Newman Centers are an integral part of the Catholic Church’s role in the continuing presence and education of students who attend non-Catholic colleges. Through such centers, Catholics can deepen their faith under the ideals of St. John Newman.

Your ticket for the: Newman Centers