Cardinal Dougherty and His Golden Jubilee 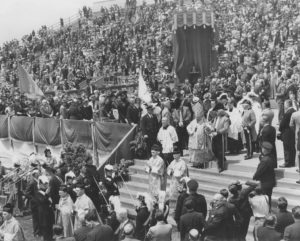 Over 160,000 people packed the Municipal Stadium (Later JFK Stadium) in South Philadelphia on June 2, 1940 to witness Cardinal Dougherty’s Golden Jubilee Mass.[1] The event was the largest gathering of Catholics in the city since 300,000 attended the 1926 Solemn Pontifical Mass for the Sesquicentennial of the Declaration of Independence.[2]

Dennis Joseph Dougherty was born August 16, 1865 to Patrick and Bridget Dougherty, both Irish immigrants living in Schuylkill County.[3] From an early age Dougherty felt a calling to the priesthood, trying to enter St. Charles Seminary in Overbrook at the age of fourteen. However, he was deemed to young so he instead attended St. Mary’s Seminary in Montreal 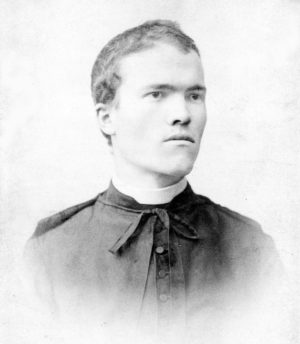 for two years before transferring to St. Charles.[4] Dougherty quickly distinguished himself as a strong student and was sent to finish his education at the North American College in Rome. He was ordained on May 31, 1890 and returned to Philadelphia to teach seminarians.[5] He would leave Philadelphia in 1903 when he was named Bishop of Neuva Segovia, Philippines. He would remain in the Philippines until 1916 when he became the Bishop of Buffalo.[6] 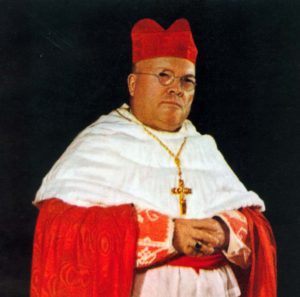 Two years later, Dougherty returned to Philadelphia when he was named its 4th Archbishop, following the death of Archbishop Prendergast. He would be made the fourth American-born Cardinal three years later on February 13, 1921.[7] One of Dougherty’s main goals as Archbishop was to expand Catholic education at every level. From the time he took over to his Jubilee in 1940, Dougherty built 7 new diocesan high schools and 120 parish schools, expanded the Seminary, and encouraged the building of numerous schools and colleges by religious orders.[8] Due to these efforts and the establishing of over 100 new parishes, Catholicism flourished in the Archdiocese and the number of Catholics continued to increase. 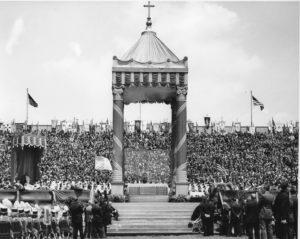 Dougherty’s Golden Jubilee of his ordination to the priesthood was seen as a way to honor his work in expanding the Church as well as celebrating Catholic life in the city. A letter from Hugh Lamb, Auxiliary Bishop of Philadelphia stated that the Mass would be a great “demonstration of Catholic faith, Catholic loyalty, and Catholic solidarity.”[9] Planning for the Jubilee began in January of 1940, with the Municipal Stadium soon being selected to host the Mass.[10] Planning progressed quickly, with the Archdiocese chartering 600 trolleys and 150 buses from the Philadelphia Transportation Company (predecessor of SEPTA) to bring Catholics to and from the Mass.[11] By May, the parade route was laid out, with multiple parish groups starting on East-West streets and converging on Broad Street where they would then march to the stadium in South Philadelphia.[12]As the day approached, the Philadelphia Inquirer reported that 100,000 were expected to attend the Mass and many dignitaries would be there including the Governor of Pennsylvania and the Mayor of Philadelphia.[13] 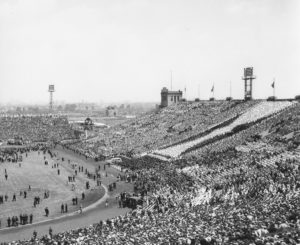 The celebrations of June 2 began at 9:30am when the parish parade divisions made up 53,000 men and boys began their march.[14] The procession to the altar began at 11:30, with Mass beginning shortly thereafter. The altar, built by Dagit and Sons, stood 53 feet high and was modeled after the altar at St. Peter’s Basilica.[15] The Mass was said by Cardinal Dougherty with Bishop Gerald O’Hara of Atlanta giving the sermon, all of which was broadcasted live by KYW.[16] In his homily, Bishop O’Hara said that Dougherty saw the “priesthood as life itself” and that the “Kingdom of God has flourished wherever he set foot.”[17] One of the most striking parts of the Jubilee celebration was the living chalice created by diocesan high school students wearing coordinated colored robes.

The Jubilee Mass was a major success with 60,000 more people attending than originally planned. The event was a reflection of a Golden Age of Catholicism in the city as the Church continued to grown and play a central role in the lives of its parishioners.

Your ticket for the: Cardinal Dougherty and His Golden Jubilee

Cardinal Dougherty and His Golden Jubilee