A hundred and fifty years ago, the First Vatican Council gave formal definition to the dogma of Papal Infallibility. While the idea of Papal Infallibility had a long history of support within the Catholic Church, such as from St. Francis de Sales in the 1500s, declaring it an official dogma created new tensions with Protestants and secular governments.

The decrees and canons issued by the First Vatican Council in 1870 laid out the argument for the existence of Papal Infallibility. The Council declared that there are two kinds of knowledge: natural reason and divine faith, the latter of which involves  “mysteries hidden in God, which unless divinely revealed, cannot be known.”[1] While this may seem to put reason and faith in conflict, the Council contended that “there can never be any real discrepancy between faith and reason since the same God who reveals mysteries has bestowed the light of reason.”[2] From there the document traces the history of papal authority and the role of revelation, beginning with Peter being given the keys to the kingdom and the apostolic succession.[3] The Council then cited previous councils and Church Fathers that supported the primacy of Rome, such as the Council of Florence which declared the Pope the Vicar of Christ.[4] From there the Vatican I concluded that: 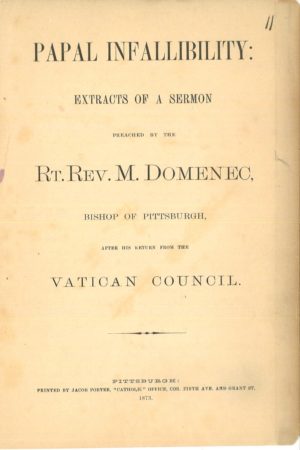 the Roman Pontiff, when he speaks ex cathedra, that is when in discharge of the office of Pastor and Doctor of all Christians by virtue of his supreme Apostolic authority he defines a doctrine regarding faith and morals to be held by the Universal Church, by the divine assistance promised to him in blessed Peter, is possessed of that infallibility with which the divine Redeemer willed that His Church should be endowed.[5]

While many within the Church saw this as simply reaffirming what was already true, many outside the Church saw it as a threat by the papacy. In a pastoral letter, Bishop Domenec of Pittsburgh, stated he opposed a definition of infallibility as he feared “the enemies of the Catholic Church would give a wrong interpretation to its meaning,” and ‘dissenting brethren would make use of this definition to oppose the Catholic Church.”[6] One wrong interpretation that Bishop Domenec had to address was that infallibility did not mean impeccability, which claimed that the pope could never sin in his individual capacity or err as pope when not speaking ex cathedra.[7] 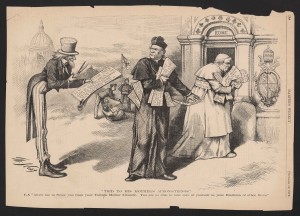 One of the highest profile debates on this issue was between British Prime Minister William Ewart Gladstone and Cardinal John Henry Newman (now Saint Newman). In a pamphlet published in 1874, Gladstone declared that Papal Infallibility was “at war with modern thought” since faith and morals touch on every part of human life and thus “infallibility is as wide as it may please the Pope.”[8] In a second pamphlet, he argued that “claims [of Infallibility] asserted by the Pope are such as to place civil allegiance at his mercy.”[9] The concern of Gladstone is that Catholics will give loyalty first to Rome and second to Great Britain. This idea that a Catholic cannot be loyal citizens was also displayed is a contemporary cartoon by Thomas Nast, which showed American Catholics literally tied to the Pope at the hip. One of the papers the pope holds reads "oath of allegiance to the Pope." Also in the background, the Germans can be seen cutting their attachment to Rome, which is a reference to the anti-Catholic laws enforced by Otto von Bismarck after Vatican I. 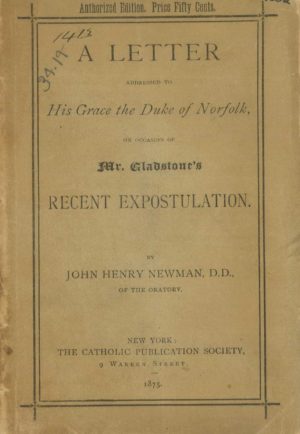 Cardinal Newman replied to these allegations by stating that “to conscience first, to the pope afterwards.”[10] For Newman this meant that since we are governed by our consciences  which are informed by Moral Law and since the pope cannot change Moral Law, there is nothing the pope can do to control our lives as Gladstone feared.[11] Furthermore, for the pope to be infallible it must be on matters of salvation and deal with the whole church, which means he could not use his authority to speak ex cathedra on matters only relating to one country. Thus, Newman concluded that there is “no inconsistency in my being at once a good Catholic and a good Englishman.”[12]

Not all of the outside reactions to Papal Infallibility were negative, however. For instance, Archbishop Wood received a letter from a convert in 1872 stating that “no one dogma of the Church had any attraction for me but the Infallibility.”[13] The First Vatican Council’s decree on Infallibility was the culmination of almost 2000 years of religious tradition and theology. Despite secular concern over popes using it to control Catholics, Infallibility has only been used twice. The first was Pope Pius IX declaration of the Immaculate Conception (which actually was declared in 1854, the Council’s decree affirmed that Pius was speaking ex cathedra) and the second on was Pope Pius XII’s 1950 declaration of Mary’s Assumption into heaven.

Your ticket for the: Papal Infallibility