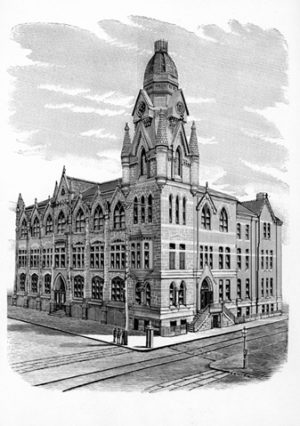 The start of the new academic year marks the 130th anniversary of the opening of Roman Catholic High School. The school was the dream of Thomas E. Cahill, a prominent Catholic businessman in the city. Upon his passing on August 9, 1878, he left most of his fortune to “build and establish, The Roman Catholic High School… for the free education of boys.”[1] The land would be purchased in 1884 at Board and Vine with construction starting two years later.[2] The building was designed and built by the famed Philadelphian architect, Edward Durang, at the cost of $128,000.[3]

After four years of construction, on September 6, 1890, a dedication service was held at the newly completed school. In his speech, Archbishop Ryan stressed the importance of the first free Catholic high school in the nation, stating that public schools did “not go far enough in the grand mission of education or calling out the powers of the soul.”[4] Classes started on two days later with 105 freshman students; however, only a quarter of them would graduate as many dropped out because of the rigor.[5] Despite the low graduation rate, Roman Catholic quickly became popular so that by the turn of the century they needed entrance exams to select the incoming students.[6]

As the school expanded academically, it also started to branch out into athletics and other extracurricular activities. The first recorded interscholastic game occurred in March of 1893, with Roman beating St. Joseph College (then the name for both the high school and university) in baseball 14-10.[7] Other sports would be added and the football games against St. Joe’s and La Salle would lay the ground work for the eventual Catholic League.[8]

Soon after the opening of Roman Catholic, there were calls to open a similar high school for girls. While a full high school was not feasible at first, the superintendent of schools, Father Philip McDevitt, did open 5 learning centers based out of parishes in the city. [9] The centers acted as two year institutions and would be replaced in 1911 when through a generous donation from Mary E. H. McMichan opened the Catholic Girls High School, the first Diocesan Catholic high school in America. A few years later at the request of Mrs. McMichan, it was renamed the J. W. Hallahan Catholic Girls High School after her brother.[10] 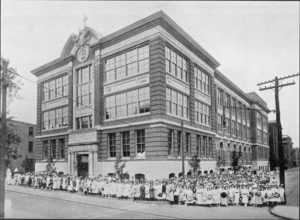 With only one high school for boys and girls for the entire city, both quickly became overcrowded. Due to this, West Catholic for boys was opened in 1916 as an attempt to lessen the burden on Roman. However, by 1925, Roman still had 12 different annexes throughout the city as the main building could not hold all of its students. To better accommodate the high enrollment, the Archdiocese started to open more Catholic High schools, adding Northeast Catholic in 1926 and West Catholic for girls in 1927.[11] The school system would continue to expand throughout the Archdiocese, with Cardinal Dougherty building more schools within the city and Cardinals O’Hara and Krol expanding into the suburbs. By 1964 there were 26 high schools in the archdiocese with over 60,000 students.[12] 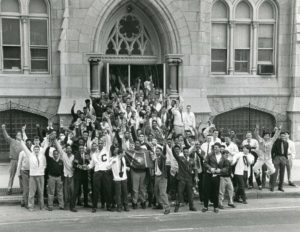 However, as the schools expanded, the growing lack of priests and religious meant more lay teachers were needed to fill the gaps. As the costs to run the schools increased, the archdiocese had to start charging tuition or risk closure. Roman Catholic, was almost of victim of closing in 1986; however, a large response of fundraising and increased enrollment saved the school.

Starting with Bishop Neumann, the Archdiocese of Philadelphia became a model for education because of its parish school system. As the first diocese to have a free boys’ and a girls’ high schools, other dioceses once again looked to Philadelphia as a guide to expanding educational opportunities.

[1] IC119, Will of Thomas E. Cahill & Charter and Constitution and By-Laws of the Roman Catholic High School, 6.

Your ticket for the: Roman Catholic and Archdiocese High Schools